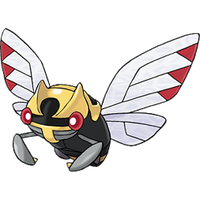 .TT also known as Dotty is a Ninjask that is one of A's Pokémon. She is female, has a Timid Nature, and is currently Level 20. She is not currently holding anything.

While trying to challange Roxanne she was accidently deposited into the PC. She was renamed to . TT by the Name Rater in Slateport but only after several previous attempts also resulting in ATA being renamed to ATMMMGMGG. Finally when she evolved at Level 20 into Ninjask, she also shed off another new Pokémon, Shedinja.

Nincada is a particularly interesting Pokemon because at Level 20, it evolves into two pokemon at once; The speed demon Ninjask and the almost immortal Shedinja. Unlike future generations where a Poke Ball and a free space in the party was required, Generation III simply requires the free space. Due to this detail as well as the ability Wonder Guard, Shdeinja is one of the most hyped-for Pokémon in the TwitchPlaysPokemon Emerald Version run.