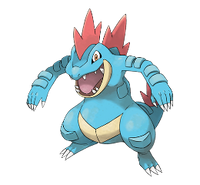 AAAAAtttta also known as King Leer, Lazorgator, or General Gator is a Feraligatr that was the starter Pokémon of AJDNNW in Twitch Plays Pokémon Crystal Version. He was named AAAAAtttta during the Gator Wars and the nickname Lazorgator after using Leer nine times against a Pidgey.

When he was still just a Totodile, he was chosen as AJDNNW's starter on Day 0 (0 days, 0 hours, 15 minutes). After that they left New Bark Town and on their way to Mr. Pokémon's, Totodile fought a Pidgey and after using Leer nine times against it gained the nicknames Lazorgator and King Leer by the Hive Mind. After surviving several fights on 1 HP and nearly becoming Level 7, Totodile died for the first time.

After hours of level grinding Totodile while everyone else was fainted, AJ finally made it past the ledge at into Violet City, where with the help of Lazorgator he defeated Falkner, earning him his first badge. After this  Totodile reached Level 18, but while evolving just like (ABJSS) before him, people began pressing B, making it impossible for him to evolve. This continued until he reached Level 28 when he finally evolved into Croconaw. This was the beginning of the Gator Wars.

Starting on the third day, AJ had already defeated all five Kimono Girls and received the HM for Surf. Just after this, Croconaw evolved into Feraligatr. Democracy kicked in shortly after and the Hive Mind replaced Scary Face with Surf. The day continued without any problems until they reached Olivine City, where a dispute erupted amongst the Hive Mind, some who believed that a overpowered Lazorgator was carrying the entire game and making it impossible for any other Pokémon to contribute. A anti-Lazorgator fraction was formed afterwards and planned to release him or put him into the PC until AJ's other Pokémon had a chance to get stronger. This chaos continued for several hours as AJ was dragged all across Olivine City, even causing the release of a few Pokémon.

Finally, Feraligatr was deposited into the PC as a training session began in Route 39 but little progress was made due to the Gator Wars continuing. After some grinding the Hive Mind went back to the Poke Mart to get some more Poke Balls but they where sidetracked to the PC by some members of the Hive Mind who wanted to retrieve Gator. A battle for control breaks out against those who want him back and those who want him in the PC. According to lore, after The Admiral was released due to the Gator Wars, this caused Lazorgator to turn from the cute Pokémon to the godslayer it is today. In the end, Democracy was activated, successfully withdrawing Feraligatr from the PC.

However during Day 4, another war for control breaks out between the Pro-Gator and Anti-Gator fractions in the Cianwood Pokémon Center. During the struggle, all Pokémon but Gator are deposited into the PC. AJ withdrew Zubat, Smoochum, and WWWEEE without any casualties and names Box 1 IRmn before heading towards Route 41. However after reaching Olivine City, another Gator War erupted. After much struggle, AJ heals his Pokémon and heads to the lighthouse. The Gator Wars continued with the Anti-Gator fraction becoming more powerful then ever before a compromise is suggested, to avoid having the PC, AJ returned to the Day Care to deposit Feraligatr. Of course, to do this shuffle, he had to use the PC anyway, and ended up with a party comprised of BBBBBD, himself, Hoothoot, Shuckle, and Eevee. Wooper had been released in this battle. After running to the Name Rater, Feraligatr was renamed to AAAAAtttta, ending the Gator Wars.

Days passed after the last Gator War and after teaching Cut to Lazorgator and blacking out in Victory Road, AJ's team finally made it to Ecruteak City and defeated the three Guardian Sages of the Tin Tower. When they entered the Tin Tower, the three Legendary Dogs appeared before AJ. Raikou and Entei flee but Suicune challenged him. The battle was fierce with many attempts to capture him, but in the end Feraligatr finished off Suicune, giving him the name of Godslayer and starting the term "No Gods.  No Kings. Only 'Mon. Afterwards thanks to Lazorgator's help the Elite Four was defeated and we made our way towards Kanto.

No Gods. No Kings. Only 'Mon

After defeating all eight of Kanto's gyms, AJ challenged RED on Mt. Silver numerous times, blacking out but not without Lazorgator's help in defeating some of the Pokémon. On the eighth attempt after some help from Katie, Metal Gear, and Burrito, Lazorgator was able to finally take down RED and his team, finally freeing the world from gods. 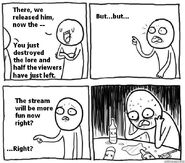 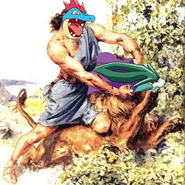 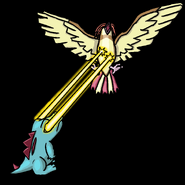 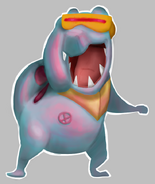