Bird Jesus is a recurring character in Twitch Plays Pokémon seasons. He is represented by Pidgeot's line of evolution. In the Red Version season, the stream captured the character as a Pidgey, where he was officially nicknamed aaabaaajss. The stream then evolved him into a Pidgeotto and finally into a Pidgeot. In the Crystal Version season, Bird Jesus returned to the stream in the form of another Pidgey captured early in the game, this time with no nickname. In Red Version, he was considered the team's leader and savior, sent by Lord Helix to guide Red through the game. He became the main hero of the story after the death of Abby, the Charmeleon.

The Pidgey captured in Crystal was believed by many to be Bird Jesus, although he also earned the moniker "Brian" (a reference to Monty Python's Life of Brian) from the chat room. A frequent comment in regards to this was: "He's not the Messiah, he's a very naughty bird." While this second Pidgey did represent Bird Jesus to many returning Twitch Plays Pokémon viewers, the original Bird Jesus of Red made a surprise return thanks to a modification of the stream's Crystal ROM. Crystal players faced RED at Mt. Silver but were instead greeted by the team they used to defeat Blue in the Red Version season. This means that while the Crystal Pidgey could indeed be an incarnation of the Bird Jesus, he is not a reincarnation of the Bird Jesus used in Red, as both Pokémon exist separately within Crystal's narrative.

Bird Jesus was introduced to the stream on the first day, when he was captured somewhere before Pewter City. It isn't clear where exactly this happened, as Twitch Plays Pokémon did not begin recording the Red playthrough until late in its second day.

During the first confrontation with Giovanni, Red and Giovanni's final fighters had critically low hit points when Bird Jesus performed the non-damaging move Whirlwind on Giovanni's Kangaskhan. Not only did this move do no damage but it also had no effect, as Whirlwind in the first generation games did nothing during trainer battles - the ability to force the opposing trainer to switch only appearing in Generation II onwards. Even then, Whirlwind cannot switch the opponent's current Pokémon with another if all but their current Pokémon have fainted. With Bird Jesus' turn in vain, Kangaskhan took the opportunity to deliver the finishing blow, causing hours of progress in Team Rocket's headquarters to be lost.

Bird Jesus redeemed himself in the rematch against Giovanni, where DUX aided him in succeeding.

Due to Gust being the first attack in his move slots in Red Version, Bird Jesus could competently fight most enemies he faced during the Red season, which quickly caused him to become the highest leveled member of the team by more than 20 levels. During the Red season, Bird Jesus was also known by some as the King of Clutch, being able to pull off the luckiest critical hits when needed. 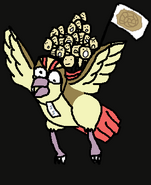 Bird Jesus at the Last Supper.

The crucifixion and return of Bird Jesus. 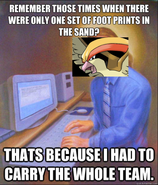 Bird Jesus being sassy yet correct. 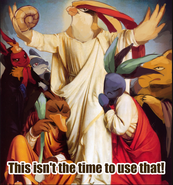 Bird Jesus with his team. 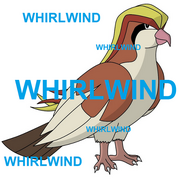 One of the Bird's favorite moves.
Community content is available under CC-BY-SA unless otherwise noted.
Advertisement