View source
watch 01:36
We're Getting Mutants in the MCU - The Loop
Do you like this video?
Play Sound

Dig Rat was the second member to join Red's team. Dig Rat was perhaps the most controversial member of the team next to only The False Prophet. Dig Rat received his fan-given name from the fact that he was taught the TM for Dig, which can allow the player to leave a dungeon when Dig is selected from the menu. While this can be useful under ordinary circumstances, Dig has often been selected at inopportune moments, causing frustration amongst the players/viewers. Such moments include digging out of Rock Tunnel after making considerable progress, and most infamously, digging out of the Team Rocket Hideout after finally defeating Giovanni, but before picking up the highly coveted Silph Scope. Because of this lack of cooperation, Dig Rat is sometimes called an agent of the Dome Fossil.

Dig Rat was baptized under the Helix with the new name "AAJST(????" He is still known as Dig Rat popularly, but made efforts to redeem himself by one-shotting Gastlys in the Pokemon Tower with Dig.

Status as a Team Member and PC History

Dig Rat was with the team from the early hours, and had no name in the beginning. In Cerulean City, the team picked up the Dig TM and taught it to this Rattata, thus giving birth to Dig Rat. However, Dig Rat quickly became more of a hindrance than help, as during the team's adventures in Rock Tunnel, Dig Rat would, at inopportune times, use Dig and return Red to the entrance. Because of this, Dig Rat was deposited into the PC when the team reached Celadon, though at the cost of also depositing the beloved S.S. Ticket.

After the team managed to defeat Erika without the help of Dig Rat, the hivemind argued over getting Lapras or Eevee to become the team's designated surfer (Eevee would hypotheticlally evolve into water-type Vaporeon). With the team now being full, Red was directed to the PC in an attempt to deposit someone. Abby and Jay Leno were tragically released by accident, and Dig Rat returned to the team, though along with the S.S. Ticket. The team then made it into the Rocket Hideout in the Game Corner, but Dig Rat, typically, dug them out numerous times. When trying to deposit him once again, Bird Jesus was accidentally deposited instead. Bird Jesus was then retrieved but at the cost of the Helix Fossil. Once again was Dig Rat nearly deposited, instead this time rescuing Helix. Dig Rat continued to dig the team out of the Hideout at innapropriate times, especially after defeating Giovanni but only before picking up the Silph Scope.

Approximately one hour after the capture of Zapdos, Red was directed to the Power Plant PC in an attempt to replace a Pokémon in the party with him.  The stream was in Anarchy mode at the time.  Players first deposited Air Jordan, followed by Bird Jesus approximately a minute later.  At the 08h 22m 05s mark, Zapdos was withdrawn from the PC. The goal of the players was now to fill the last spot in the party. However, due to the mechanics of Anarchy mode, Dig Rat was unfortunately released by accident along with 11 other Pokémon.

Sometime on Day 1 before Pewter City.

On Day 11, while attempting to retrieve Zapdos from the PC, Dig Rat was released along with 11 other Pokémon. 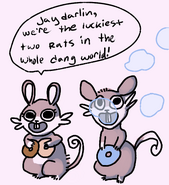 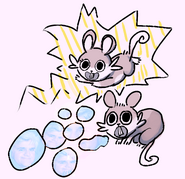