After Twitch Plays Pokémon Red Version, the streamer put on a couple of Side-Games until Crystal started and has recently done the same thing in the six days between Crystal and Emerald.

Recently some lore has developed within the Crystal and Emerald intermission with Keitai Denjuu Telefang, Catz, and more.

Most people have taken Telefang (also called Pokémon Diamond) as a prequel to Crystal with the main character being Joey traveling through out the region.

Catz and Dogz have become popular lore with the TPP Community. Some of the lore includes checking the clock, watching the cat walk around, 10 PM, the cat walking in place, and our father. Our cats name was Michael Catson and our dogs name is CMAAAA. 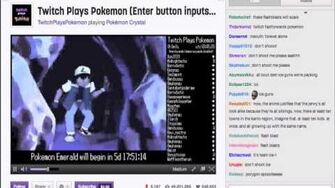 When we where watching some of the Pokémon anime some meme's developed due to the controls. These include Team Rocket saying bombs away, Pikachu's cry being repeated, Ash going "auaahhaha" repeatedly, and more. The episodes played were:

While we were waiting for Pokémon Platinum to start, 2 days before the game we began playing the game Mario Party for the Nintendo DS. This ended pretty similar like when Twitch was watching the Pokémon anime, with Luigi losing lots of minigames, Yoshi betraying Luigi, Peach being a cheater and Toad not being able to defeat the first boss.