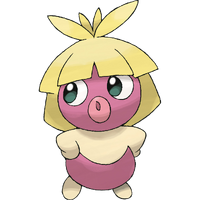 Smoochum also known as Duke Smoochum and Nicki Minaj is a member of AJDNNW's team in Twitch Plays Pokémon Crystal Version. We first received Smoochum as an odd egg on the first day (1 day, 7 hours, 31 minutes) and was later hatched at Level 5 on Day 1 (1 day, 14 hours, 56 minutes). She continued to be a "filler spot on our team" with some members of the Hive Mind requesting that she was to be leveled up into a Jynx.

Smoochum was first received as an odd egg from the daycare man but later hatched and was given the nickname "Duke Smoochum". She was then placed inside of the PC and continued to be switched in and out of the team. She was given a Rare Candy sometime during those placements as the Hive Mind decided if they wanted to level her up into a Jynx or replace her with a different member of the team.