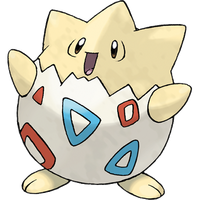 Togepi also known as Prince Omelette is a former member of AJDNNW's team in Twitch Plays Pokémon Crystal Version. This egg was received as a gift from Elm's Assistant within the first day (1 day, 3 hours, 57 minutes) and was later hatched at Level 5 on Day 1 (1 day, 12 hours, 9 minutes). The Prince was accidentally released during one of the Gator Wars at Level 12 on the third day (3 days, 15 hours, 24 minutes).

During AJ's visit to Mr. Pokémon's House, he received a Mystery Egg, which after being analyzed by Professor Elm's Assistants, hatched into a Togepi, immediately called Prince Omelette by the Hive Mind.

That same day (Day 1), Prince Omelette reached level 7 and learned Metronome, his first attack skill. He used Sacred Fire, Ho-Ho's signature move one time thanks to Metronome. After that, he reached level 12, having the skills Growl, Metronome, Charm, and Flash under his belt. Sadly, Prince Omelette lived only 3 days and 15 hours within the team. When the Hive Mind was trying to release AAAAAtttta, he was accidentally released instead.