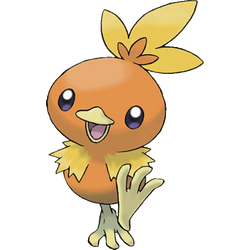 zyyxyy also known as Zexy is the starting Pokémon of A in Twitch Plays Pokémon Emerald Version. He was male, had a Lonely Nature, and was released at Level 37. He was also holding a TM08: Bulk Up.

After wandering around in Littleroot Town for an hour, A headed out to save the professor and in doing so picked Torchic as her starter. The professor later gave her Torchic and from then onward he was called "  Zyyxyy". While trying to challange Roxanne he was accidently deposited into the PC but was withdrawn an hour later.

Zexy, as a name, shined through as the personality of the Torchic by offering it as a lone-wolf, suave, pseudo-French persona. He is often depicted as having a single red rose in his mouth, and he is sometimes shown looking down, with long feathers covering one eye and long feathery arms. This rose was offered to A's Marill ("The Virgin" and later "M4" or "Moe") who frequently blocked his advances. The Virgin responded by attacking Zexy in double battles when possible.

Zexy made it all the way to Level 36 without ever evolving. Zexy was eventually stored in the PC in an effort to more efficiently train A's Nincada, "Dottie," and evolve it to a Ninjask, as well as to obtain a Shedinja. After the successful evolution of Dottie, the fans led A back to the PC to retrieve M4 and Zexy. "Zyyyxyy" was later released on Day 3 after an attempt to go to the PC, becoming the first Pokémon to be released in Twitch Plays Pokémon Emerald Version.

There is much speculation about what happend to Zexy after his release.